Tracking202.com is an advanced affiliate marketing tracking system that has a ton of features. Track converting keywords, PPC accounts, affiliate accounts, profit graphs, and much more. The best part about this? It’s free.

I’m friends with the founder, Wes Mahler, and can vouch that he’s a cool guy. If you create a free account and log in, you’ll see all that Tracking202 has to offer. If you click on the “Overview” tab, you’ll see what would be a nice overview of your affiliate stats plus a nice chart (I love charts). 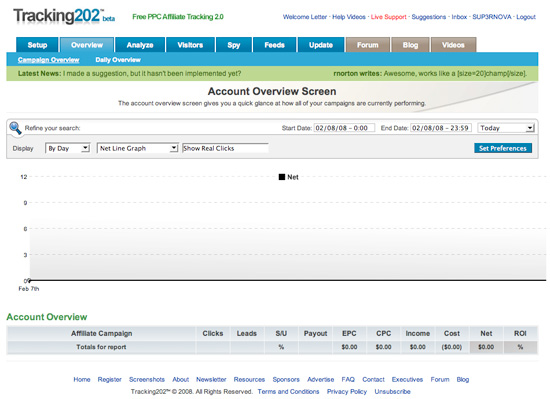 I can’t even begin to describe all of the different options you have to choose from. Tons of different graphs showing you whatever you want, from EPCs to IP addresses. They have keyword analysis as well which we all know is key. They also have something called Spy View, which they describe :

Spy is a live view of visitors interacting with your affiliate campaigns.

It looks like it refreshes every 5 seconds or so and shows what live visitors on your sites are doing. Kind of a useless tool but pretty cool. They also have their own Feedreader built into the site which is a decent addition. If you’re confused as to how to navigate around and import all of your data, they have a nice selection of videos that walks you through the process step-by-step.

All these good things about the software but now onto the bad. The only bad point which Wes points out himself in a lengthy post, is that Tracking202 hosts all of the data. Which means as much as they tell you they’re not going to steal any of your data – they still have access to it.

It’s the main point that Wes talks about in his post (I actually didn’t have enough patience to read the whole thing haha), so he obviously knows it. I knew about T202 a long time ago, and wanted to test and post about it, but there’s no way I was uploading my account data into somebody else’s server.

What do I think Wes should do? I think he’s got a great product on his hands that a lot of people would have use for, but wouldn’t use now due to privacy issues. I would keep it in public beta for another month or so and get some more feedback. Then I’d make it private again then write a self hosted version and sell it for $500 a copy – it would be well worth it.

Of course when he does that I’m going to demand 5% of the revenue for such a great idea :p.