My One Year Anniversary

It’s a little overdue, but my one year anniversary in affiliate marketing was four days ago, on January 20th of 2008. My first ever commission was on January 20th, 2007 with AzoogleAds. By day information isn’t available that long ago so I can’t take a screenshot, but I do have a print out of that month, and here’s what that day looked like :

Boy what a noob I was back then, but hey we all started somewhere. I was excited to make 28 bucks that day, it was my first ever sale. I quickly added up revenues throughout the year and threw it into a little chart for you to see. 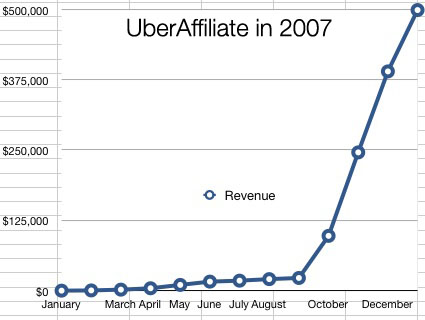 In the first few months it looks like I stayed the same, but that’s only because the numbers eventually get really big, so the graph makes it look like no growth. Back in the first few months I was consistently doubling last months revenue. My first month was $708, and by May I did almost $11,000.

How the hell did I have that massive spike around September/October?!

That’s probably going to be the most asked question with this post. Well, I made some connections with people, found out a couple things that worked pretty cool, and then just scaled the hell out of it…scaling that’s still going on till this day. Once you hit it off with one big opportunity, more just keep coming your way. I have so many huge things going on right now, it’s literally too much for me and I’m going to have to start hiring employees. I kind of overbooked myself with projects, but I’ll get them done and things should keep increasing like they are.

Anyways, it’s more power to you guys that are fresh in the game. I did this in one year, why can’t you?