Well, another Affiliate Summit has come, and just as quickly as it came it’s now gone. It really flew by (well the two and a half days I was there), they were days of 2 hours sleep and 2 meals. No food + no sleep + craziness all day = craziness. Anyways, I’m going to talk a bunch about how the event was, what I learned, things I did, opinions I have, etc. I also have a few pictures that I’ll be posting up for you guys to see.

The first thing I want to say is that it was AWESOME to see all the UberFans that were there. I got a chance to chit chat with so many of you, and you were all names I recognized from either blog comments or emails. It was really fun getting to meet you guys and just makes it more motivational for me to blog more. Now let’s talk about the summit… 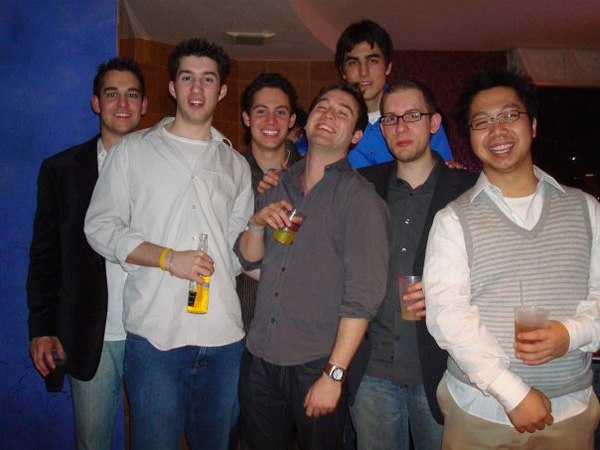 After the party some of us went back to the Rio and I so sadly enough had to watch my friends all gamble (which I couldn’t because of my age). Lucky I’m legal in Canada so I’ll be going up there this weekend for sure to get my gambling craving out of me.

Day two was my first official day at the summit. I woke up nice and early (after sleeping for 2 hours) to go to the keynote speech. Don’t get me wrong – I love Affiliate Summit it’s my favorite event and it’s great, but I never like going to any of the sessions. I walked in and the keynote speaker was Jason Calacanis. The first 30 minutes or however long it was, he basically just talked about how affiliate spamming is bad and we all shouldn’t do it. If someone is going to spam, a keynote speech isn’t going to change their mind. I’m not saying I spam, which made it more boring for me because I don’t even spam Squidoo or do malware of any of that. He was a funny guy and I laughed a few times, and maybe he talked about more, but I was in the expo hall by then.

The expo hall was cool, my managers from CX Digital, Copeac, and CPA Empire were all there so I got a chance to talk to them. CX Digital had my vote for the best booth, it was the tallest, coolest, and right smack dab in the middle. So I walked around a little and just socialized with some chaps, and then had a lunch meeting. Came back from that and floated around the expo hall some more, and then headed back to my room to hop on my laptop for a little and relax before the coming night. Nighttime came and first I stopped by a private party that Copeac was having at the Palms. There was an amazing view of the city and I just relaxed and talked to Mike and some of the Wickedfire guys. After that we headed to Affiliate Bash, where Blue Man Group was performing. Here’s where the night just kind of tanked down. Unfortunately I wasn’t able to even get into the bash because I’m only 19…I tried a few different ways and none of them worked. So I went back to the Rio and ordered some room service because I was starving, hopped on my laptop a bit and then met up with some people down at the casino. I heard Affiliate Bash was crowded and BMG only played for like 10 minutes, so it was all good I guess.

Now the final day of the Summit had come. I woke up early to hit the expo hall up a little more and meet with some people. Then came the only session that I actually wanted to go through and sit through all of it. It was the Super Affiliate panel with John Chow, Zac Johnson, Amit Mehta, and moderated by Kris Jones. Given the fact that these were all highly popular affiliates, I thought it would for sure be interesting…and it was. Since most of these guys are followed religiously and people take every word they say as a fact, I’ll break down each speaker and how I thought they did.

Kris Jones – Kris was the moderator so he mainly was kind of just asking the other affiliates questions to start some conversations, but he did some answering of his own. I know him personally and he’s a really cool guy and definitely knows what he’s doing in this industry. He’s a great public speaker and can connect with the audience and I thought did a great job as the moderator.

John Chow – John Chow is who he is, and I thought he did a decent job on the panel. I don’t really think people think he’s some PPC Super Affiliate, his specialties seemed to be content sites and then blogging. He didn’t give any PPC advice and he tried to relate some of his experiences to the questions about PPC arbitrage (which was the most talked about topic). Which I thought was a good thing, because he wasn’t trying to be something he’s not. Do I think he would be better on a BlogWorld panel than an affiliate marketing one? Yeah. Did he do a bad job? I don’t think so.

Amit Mehta – Amit definitely whored the mic the most, but that was because 90% of the questions had to do with PPC or landing pages, and none of the panelists could really attempt to give a solid answer except Amit. I kind of disagreed with some of the stuff he said and thought he fluffed up some things and made them sound easier than they really are, but I do think he’s a good public speaker and is good at communicating with his crowd. He was outgoing and wanted to answer all of the questions, and I think he satisfied most people with this answers.

Zac Johnson – The last one on the panel was Zac Johnson, and this is where I was mostly confused. Dating a while ago back when I started checking out his blog, I always had the impression that he was a PPC super affiliate and that’s where he made his cash. His most famous post is even titled “The Super Affiliate’s Guide to PPC Marketing”. So I found it a little surprising when he said this (it is an exact quote) :

“I don’t really thrive in the pay per click marketing area.”

I was just kind of like…huh? If you admit you don’t thrive in PPC marketing, why are you a self-proclaimed PPC Super Affiliate? At least that’s the impression I got when somebody writes a post by themself saying “The Super Affiliate’s Guide…” Not to roast the guy because I haven’t even personally met him, but he didn’t do a good job on the panel. He kept freezing up when making his introduction and there were moments with just 30 seconds of silence. Then he just kind of talked about his big Myspace site (where the check he posted came from 2 years ago) and that was pretty much it. I don’t really remember him answering any other questions except for when he said the quote I posted above.

That was the main event for me at the Summit, and although I didn’t learn anything new, it was interesting.

After that it was more time at the expo hall just hanging around and talking to blog readers. I did an interview with Wes from Tracking202 along with another interview with me and the guys from AffSpy. I’m personally really good friends with all the AffSpy guys and they had a great conference. The meet market went great, affiliates were interested, networks were interested, and they won the AS Road Rally and got a free booth in Boston this summer. Here’s a pic of us with Kris from Pepperjam : 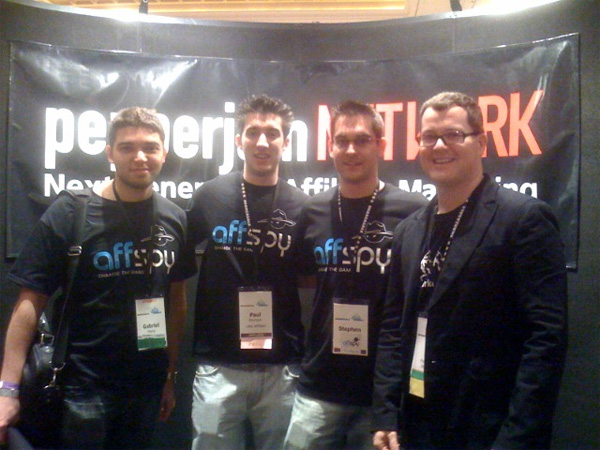 I went with some people to the casino again, then headed back to the room to get ready for a big dinner.

Dinner plans were with a bunch of guys, including John Chow, Zac Johnson, Mark from 45n5.com, Ian Fernando, Andrew Wee, Greg from BCMBlog.com, my friends at AffSpy, and others. We went out and had some BBQ and it was really good, there were so many of us we needed two big tables. Here’s a shot of most of us with our stomachs nice and full : 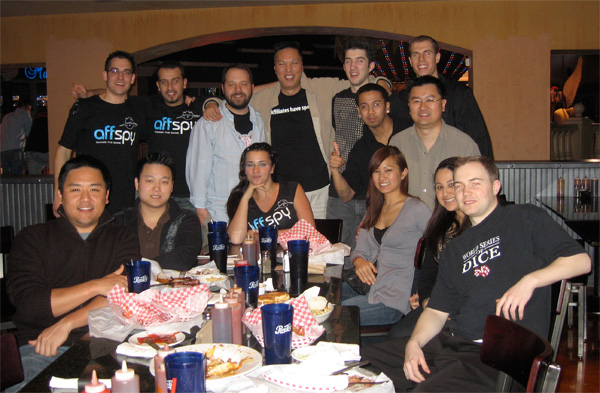 And here is an exclusive photo taken from my phone. It’s a picture of John Chow taking one of his famous meal pictures. Wow I should sell it on eBay.

That pretty much concluded my ASW. I headed up to my room and then grabbed a limo to the airport. I flew allllll night long, my flight left at 11:50pm and I arrived home at 12:15pm the next day. I really hate flying for long lol so it was pretty bad.

All in all Affiliate Summit West 2008 was a great time. I got to meet a lot of you faithful readers, put some faces with names, have a couple important meetings, and most importantly have a good time. That’s why I really went, other than one meeting I needed to have, I didn’t really have any reason to go other than hanging out with my friends and having a good time. That’s what I did and I can’t wait for Vegas when I’m 21 hah. Next Summit coming up is this August in Boston, so I better see all of you there. I have more things to expand on concerning the Summit, as well as posting the interviews I was in, so make sure to stay tuned for them. Now go make some money.

P.S. if you went to the Summit let me know what you thought of it.