How to Think Outside of the Box

You’re thinking about starting up some new affiliate campaigns, so you run your scrapers to see what’s other affiliates out there are doing right now. You see a couple campaigns that you think are easy to replicate, and if other affiliates are running them they must be profitable…right? Easy enough, you hit up your AM for a pay bump, create an almost identical landing page, create almost identical ads, and run that puppy.

While this seems like a fool-proof method for making money online, you’ll quickly find out that your campaigns aren’t profitable, and that you’re losing money on them. I would say the majority of the times it happens for one (or more) of the following reasons :

While there is money to be made simply copying other people, the most money is made from coming up with your own ideas. It’s just natural that a new style of page or way of selling something can convert better than the norm, simply because it’s something fresh that people aren’t used to seeing.

Note: the example I’m going to use didn’t really work out for me, that’s why I’m sharing it. I’m sure you’ve heard it before, but one thing to always remember is that most of your campaigns will fail…especially when you’re thinking outside of the box. For every 5 ideas that don’t work at all, there will be 1 that does work; making everything worth it.

Where the Idea Spawned

A while back, a lot of affiliate started using a new “outside of the box” method for selling grants. They would collect a persons Name and E-Mail on the first page, bomb them affiliate offers through Aweber, and then after they collected the data would take them to more landing pages pushing grant affiliate offers. I’m not about to out any pages right now, but you’ll be able to see what I mean anyway.

I thought it was an interesting way of marketing affiliate offers and also getting ads approved. Where any flog or farticle page would be rejected from most ad networks, this was something that looked new and different, and also more legit. Then I started thinking if the idea could be applied to something other than government grants…

Searching around, I realized that education offers were something along similar lines to grant stuff (since a lot of edu offers offer education grants), and then started thinking about how I could pitch it. I ended up with this page : 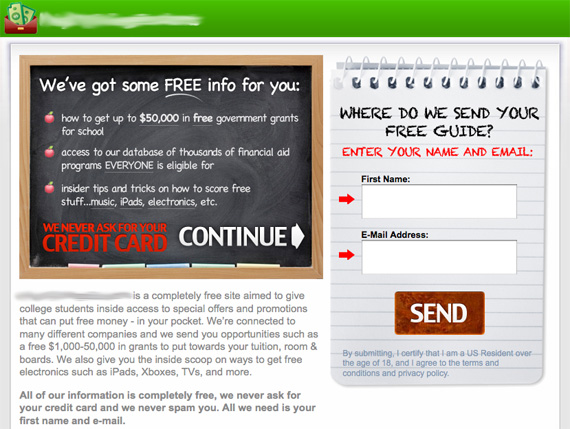 College students are for the most part cheap, so I set up a site that told them they could be saving thousands of dollars, and also access to free entertainment. As you can see I stressed the word Free a lot, and on the right they could enter some basic info to get the free guide. This page on it’s own converted decently, I think I got around 100 email submits before I called the campaign off. One they entered their name and e-mail, I took them to this page : 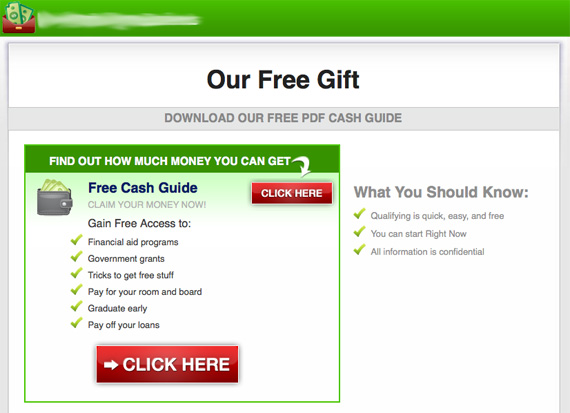 The page is simple enough and looks almost exactly like the grant second page did. If this campaign were successful, I probably would have redesigned the page and split tested a few different variations so it was more unique. This is something I designed and threw up in 2 days.

This page is extremely simple and leaves them with only 1 option…to download the free cash guide. Since that’s what they wanted anyway, shouldn’t really lose anybody on this page. When they click the button, a download link would pop up and then the page in the background would redirect to an edu offer.

So what did the PDF look like that was sent to them? It was a college cash e-book that was super basic, here are a couple screens: 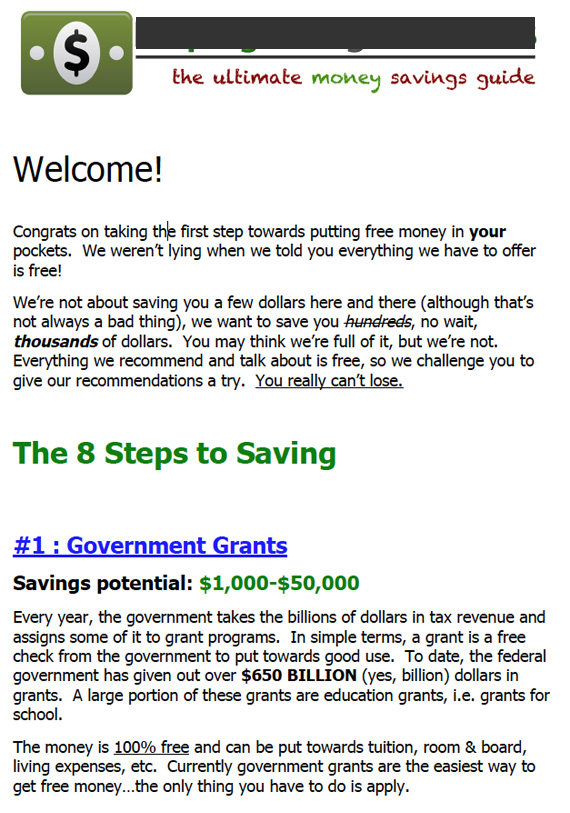 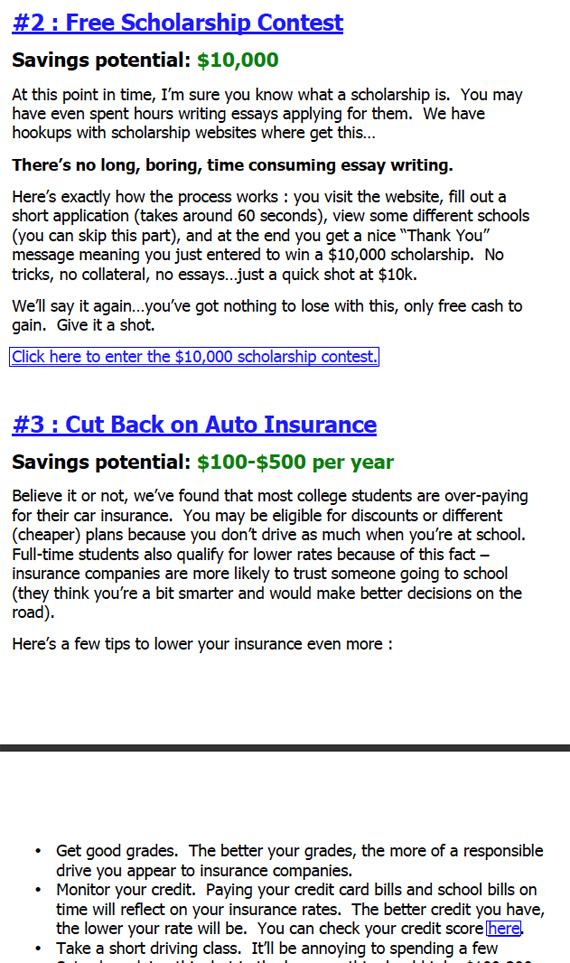 It’s just a PDF loaded with affiliate offers. Surprised? It wasn’t 100% affiliate offers because I wanted to instill as much trust as possible and make the college student feel like they were reading good advice, so I threw in the tip about Grooveshark, Hulu, etc. While it may seem like a shiesty way of doing things, it’s all legit. None of the offers require a credit card (except for the tiny credit report link I threw in there), and they’re all things that students can use to help save some dough.

Why Didn’t This Work?

To be honest, it probably could still work. Sometimes I’m overly impatient with things and if they don’t work immediately, I don’t spend time optimizing (especially if I have another project going on). Like I said I ran about 100 email subs and only got a couple edu offer leads from it. Some questions I think about :

There are many reasons it could have failed, and many things that could possibly make it successful. If I see ads for similar sites up in a few days, I’ll know what I could have done differently ;). Feel free to manipulate the idea and test it out if you want, just be warned that it didn’t work out for me initially.

So there’s an example of a way to think outside the box a bit, and push affiliate offers in a different manner than most would. This particular attempt failed, but I’ve done very similar things and have been successful.